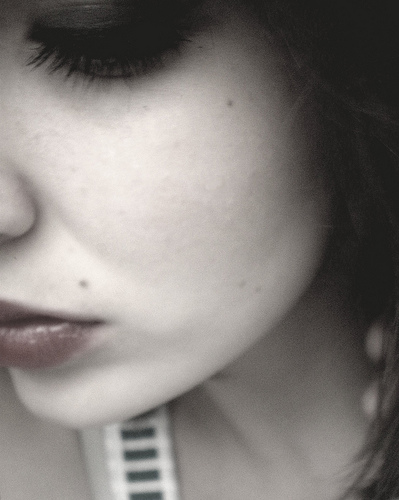 Contrary to what you may see in glossy magazines and on the big screen, not even celebrities are perfect. In fact, there are many instances where imperfections, such as facial moles, have become a celebrity’s signature feature. Beneath the makeup and before airbrushing, celebrities look remarkably like the rest of us. The following are a few stars with memorable and famous moles:

The acting bigwig’s mole has been exaggerated by cartoonists, mocked in his own films and poked fun at it countless sketch comedies.

Marilyn Monroe made moles a symbol of beauty and sophistication, and Cindy Crawford kept that idea going for another generation. Her famous mole became a symbol of exotic beauty, and women around the world tried to emulate it with eyeliner and even press-on moles.

This singer has graced the cover of many magazines, sold millions of records and did a stint as a judge on American Idol, and she has rocked her cheek mole through it all.

Even Batman isn’t perfect. The Welsh actor has a mole just below the inner corner of his right eye, but it has not stopped him from gaining millions of adoring fans.

The Latin crooner is one of the few on this list that went under the knife to rid his face of a prominent mole. The trademark mole does, however, live on in many of Iglesias’ early music videos and can be seen in the film “Once Upon a Time in Mexico.”

The Aussie actor is still heart-stopping sexy, even with his many pronounced moles.

McAdams has a number of moles that begin just below her mouth and form a constellation down across her neck. Her stunning figure and winning smile make up for the imperfections.

It does not take much hunting to find moles on Matt Damon. His upper lip is marked with a bulbous bulge, and topless scenes in many movies have revealed his back full of moles.

The “Sex and the City” star shocked fans in 2008 when her famous mole mysteriously and suddenly disappeared from her chin. Although many critics complained about her surgically removing her “signature,” Parker is pleased with the result.

The blond bombshell calls much attention to her face during her skin care commercials, but no product will remove the mole that graces her chin.

[box_light]Peter Wendt is a writer and researcher from Austin, TX interested in skin care treatment. While considering mole removal he consulted www.vanguarddermatology.com for more information on cosmetic dermatology.[/box_light]