We generally think of women as cleaner than men, but some of the latest scientific studies on public restrooms reveal some surprising conclusions. These three studies show just how dirty women and men can be when it comes to using public restrooms.

A recent study in Plosone researched the likely sources of bacteria.  The researchers sampled bacteria from human skin, gut, mouth, urine and soil.  They then took samples of the bacteria from public restrooms and compared them to the DNA sample from humans to determine the likely sources public restroom bacteria.  The results show that skin and gut bacteria were common through out the public restroom surfaces.  Many of these surfaces could contain pathogens that are easily transmitted by simple touch.  Our advice is to wash your hands thoroughly and avoid touching anything.

A follow up article in Scientific American reviewing that study points out that because so many germs live on the toilet seats of public restrooms, women’s restrooms are far more likely to have many more germs than a men’s restroom. This is a fact that makes a lot of sense when you think about it. Women sit down to use the restroom, so they’re more likely to transfer germs to the toilet seat, then taking them with them when they leave. Repeat this by the dozens of women who visit a public restroom stall in a day and you see how easy it for a women’s restroom to become germ laden and fast. In fact, from the 1500s to the mid-1800s, when people started using the restroom in cans is when bacteria and disease from using the restroom started to happen. Prior to this, people used the restroom in a hole, indoors or outdoors. A can seemed to be the feasible next step, since once it was full, someone just threw the waste out and washed the can. Still, because you now had countless people sitting on this ‘toilet’ daily, the germ situation got out of hand, spreading several diseases that would eventually kill people.

Finally a study entitled: Enteric Bacterial Contamination of Public Restrooms sampled forty-seven public restrooms to test the presence of bacteria on various bathroom surfaces.  The results show the areas most likely to contain bacteria. Here, we see the culprit is not only a woman’s toilet seat, but also the in-stall trash can or bin for disposing sanitary napkins. More concerning was the presence of coliform bacteria on more than 60% of sinks and ecoli on more than 20%.  Women’s restrooms were 4.5 times more likely to contain ecoli, which can cause serious illness. With this in mind, we become even more convinced that a women’s restrooms are filled with more bacteria than men’s restrooms. 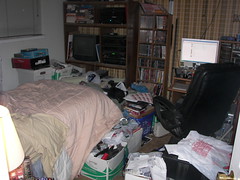 It’s clear men shouldn’t get a bad rap when it comes to cleanliness. It seems there are many scientific studies that show how women’s restrooms are consistently less sanitary than men’s. No matter how spic-and-span the women’s restroom looks from the outside, remember the areas where germs are likely to dwell and arm yourself with hand sanitizer and a lengthy hand wash with warm water and soap post-toilet stop.  If you intend to use a diaper changing station, bring your own sanitizer and changing pad.  It also wouldn’t hurt to check if management is using the proper cleaning and sanitation procedure.

[box_light]Elana Cameron is freelance writer and frequent contributor for BabyStaitions.com.  You can find her on Twitter @CleanDiapers[/box_light]