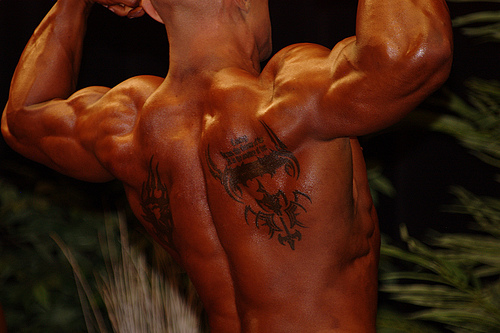 Franco Columbu has really done it all in the world of health and fitness. He was a champion powerlifter, was Arnold Schwarzenegger’s training partner for years, won the Mr. Olympia twice (5 years apart), and competed in the World’s Strongest Man competition. After he was done in the iron game he moved on to movies. We just skipped past the numerous other bodybuilding titles he won, which were quite a few as well.

Through all of that, one thing always defined Franco when you saw him; the incredible back that he had built. He literally had wings when he flared out his lats and the middle section was like a small mountain range. He had such a great back that Sly Stallone asked him to be his trainer before a few of his Rambo movies.

How did he build such an amazing and powerful back? Let’s take a peek into his training methods and see.

Powerlifting played a big part in the muscles this little giant built. His best deadlift in competition was 750 pounds which is incredible for a guy who weighed under 200 pounds. Franco used a 14 day training split and he ended up working each body part twice a week. For deadlifts he made sure to add them in on leg day every other week.

The number of sets is ridiculous unless they include warm up sets. That is definitely a consideration for an advanced bodybuilder who needs maximum stimulation. The rep range is interesting. Using 10 reps is more than normal heavy muscle building but a few less than endurance training. But the hybrid rep count really worked for Franco.

His use of exercises ensure that he is hitting his back from all angles making sure to go outside to inside and then top to bottom of the back. One thing about the back is that the muscles are big and it can be hard to hit them all perfectly from one position. By changing angles, grips, and widths used on pulling motions can really make sure you get those angle in.

But if you look at the training routines of many bodybuilders with the best developed backs in the game you always seem to find wide-grip chins and deadlifts. So if you want a fantastic back you can give Franco’s routine a try or in the least add deadlifts and wide-grip chins to your routine.

[box_light]Nutribomb Discount Bodybuilding Supplements has a huge selection of bodybuilding and exercise articles designed to give you the information you need to meet your fitness goals. You can find them by visiting us at our blog or by following us at our google plus page.[/box_light]